In this guest post, we hear from Reveille’s Lay Leader Bo Bowden as he reflects upon his time in Slidell, Lousiana.

Early one Sunday morning in July just after breakfast, Pastor Carl Blackburn invited us to answer a simple question.  “Why are you doing this?”  The night before, his church, St. John UMC in Chattanooga, TN had hosted fifty-seven Reveille members en route to our New Orleans area mission trip.

It had been the first overnight of the trip.  We gave answers you might expect.  “To help others, to share the love of Jesus Christ, etc.”  My answer was a bit tongue in-cheek – “Why not?”  Maybe the coffee hadn’t kicked in yet.  Here’s my real answer:  Serving on Church Council, we sometimes make decisions affecting youth ministry.  I felt it to be one area I had not participated in adequately.  For me, this trip was an opportunity to become more involved.

Getting to Louisiana took two days – a total of over fourteen highway hours in six vans.  Kate Rhodes and I drove one van with the oldest youth group members, recent high school graduates and rising juniors and seniors – Anna, Caroline, Courtney, John, Miranda, and Mariah.  They informed me over lunch Saturday that they were the “good kids,” and after spending a week with them I can’t argue that.  Anne Poarch joined us Sunday morning in Chattanooga.

Our convoy arrived in Slidell, LA late the afternoon of Day 2, slowed only (eventually) by a torrential thunderstorm in southern Mississippi.  Based on the campus of Aldersgate UMC, The Epworth Project was formed as a mission of several area churches joining forces with Northshore Disaster Recovery, Inc. a not-for-profit created in the wake of Hurricane Katrina in 2005.

We piled out of the vans and looked around.  Situated adjacent to the sanctuary were several outbuildings, perhaps used by their weekday school except in the summer months.  One building was halved into separate men’s and women’s spaces where we set up cots on tile floors.  Right away I began to learn things from my fellow missionaries.  Lesson One: when David Collett, a veteran of such trips, suggested creating an “’adult space” within the assigned quarters, I followed his lead.  David’s alter ego, Angus, was only emerging.

After dinner (the food is not why we were there), we paraded into the sanctuary, along with a slightly larger youth mission group from Frisco, Texas.  They were very proud of their state!  We held an opening worship, and met the staff who would lead us for the week, many of whom were not much older our youth!  The work projects had been allocated to each church group, and it was up to us to assign teams and leaders.  Kate Rhodes had done some preliminary work, and made suggestions based on age groups and prior experience of the Reveille adult leaders.

The youngest kids on the trip became my project team (Anna and Anna, Cam, Caroline, Scout, Young Carter and Young William).  Tamara Nicely was my adult cohort (a dedicated, tireless worker I found out!).   On Monday morning, each of our six project teams loaded their vans with self-packed lunches and a water cooler, setting off for their assigned projects. Our own was a half-hour’s drive to Covington, LA. 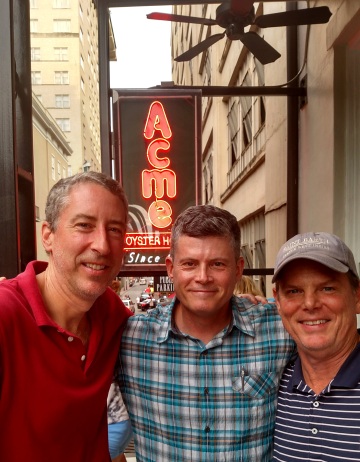 Initially, I feared there had been a mistake.  We stopped at the correct address, a brick ranch-style house, with another smaller building next to it.   After knocking twice, the only answer we got was from a dog barking inside.   We made calls back to the Epworth staff and eventually reached someone who told us that our site manager, a high schooler named Jacob, would be along soon.

There he came in a truck, followed by a van carrying two adults and eight youth from Frisco, Texas!  The owners of the Frisco-assigned project, Jacob explained, had apparently decided to have their work done instead by contractors, so all of us (four adults and fifteen youth in total) would be assigned to THIS house – the owner of whom had yet to appear.

About that time a young man whose face was framed by an LSU baseball cap and goatee smudge came out of our house.  David, followed by his girlfriend Christine.  He said he was the son of the owner, who had already gone to work.  He was himself a contractor, and since he wasn’t working that day he might be able to help us, but first he really needed to go get us all some donuts.  So in the car he and Christine went, which left only one representative owner, a sweet dog named Bella (please try to keep her inside).

The homeowner, Linda, had left a nice note pinned to a dining room chair, apologizing for missing us but thanking us for the work about to be performed.  We discovered that there was an algae-laced swimming pool in the backyard, flooded by rising water in March (a canal ran behind the house).  I was not privy to either Epworth’s application process, nor to whether the crew assignments were made known to homeowners, but when we met Linda later that day she seemed undeterred that the drywall prep and priming were being performed by a crew whose nickname could have been Mostly middle-schoolers.   No matter, the previous drywall work needed a little adjustment, which meant a full two days of mudding and sanding.   By the end of the week Linda began calling the expanded youth group My Angels.

We didn’t know it, but it takes almost three hours to get donuts in Covington, LA.  Also, we learned that IHOP would offer free pancakes on Thursday.

By Tuesday afternoon, our combined crew had completed nearly all of the sanding and mudding.  Jacob was a diligent inspector, pointing what needed more attention to pass muster.  He told us he had narcolepsy and that meant that his summer school classes needed to be scheduled in the afternoons.

On Tuesday night the Youth Choir performed for the Aldersgate congregation, one of three appearances on the week, led famously by our Musical Director Cathy Armistead.  You can tell how much our kids admire and respect her.  At a nursing home on Thursday, wide smiles formed on the faces of the listeners, and although some of the residents were unable to come down, we were told that the happy sounds echoed throughout the halls.  The last performance was a brief one during closing worship on Friday, in which our kids surprised their cohorts from Frisco who hadn’t heard them yet.  Incidentally, it turns out that Reveille has its own von Trapp family, the Bullocks.

Wednesday was a day off.  The morning was a guided van tour led by some of the site managers.  I felt lucky to have drawn Hope, a college student from Texas and aspiring youth pastor.  I like her prospects.  My van was filled with high-school boys this day (it smelled different after), and she was able to command their attention, luring them briefly from PokemonGo.   She pointed out places along Lake Pontchartrain struck hardest by Katrina, including an abandoned amusement park and a section of new construction whose rumored involvement by Brad Pitt piqued the interest of the adult women in the van.

In New Orleans that afternoon, we split into three groups for guided walking tours, beginning with a cemetery.  A thunderstorm doused the sweltering heat, and we waited in a Visitors’ Center.   My group’s guide was a genteel native of the area who was extremely knowledgeable.  He lamented the misinformation about Katrina (in truth all areas were affected equally, not just one), and later pointed out Brad Pitt’s local residence, though he didn’t see what the fuss was about.  Together again at dinner – a wonderful find by Kay Craven, a private space above the restaurant – someone suggested that one of the other tour guides (the one with the indistinct European accent) seemed a little too fascinated by voodoo.

By Saturday morning we were packed up and on the road early.  We arrived at our second host church in Chattanooga, Jones Memorial UMC, and even made it to a Lookouts minor league baseball game.  We returned to Reveille an hour early on Sunday in time for kids to have dinner with their parents.

Mission trips have taken Reveille’s youth to Oklahoma, West Virginia, Eastern Shore Virginia and even New York City.  They have been exposed to those in need, and have helped alleviate some suffering and bring joy where there is often very little.   Jesus said that we will always have the poor among us (John 12:8) and told his disciples to sell their possessions and give to the needy (Luke 12:33).  So, we should expect to continue growing this ministry.  It conveys upon us a requirement to use our resources wisely, making sure that as much as possible goes for the benefit of those we intend to help.  To that end, we should ask of every trip we take what percentage of our resources are being applied directly to mission.  Would we be able to help a greater number of needy people if we actively look for missions in closer proximity?    Might we be able to cultivate ongoing relationships if we focus on communities we can reasonably expect to return to?   I confess, I don’t know the right answers.  A benefit of these trips is that our church members draw closer when we spend time together away from home.

Since our return, some of the areas we visited have been struck yet again by flooding waters.  Such is the nature of that topography, where towns built on reclaimed swampland lie below sea level.  The Epworth Project began as a disaster relief effort, and has become an important poverty relief ministry.  Church groups are drawn there from a wide swath, and I suspect that will continue.  What about people elsewhere, whose personal disasters do not register on the evening news?  Are we perhaps looking (or driving) past people in similar need?

As a mission group, we wouldn’t learn why were called to take six vans loaded with teenagers all the way to Louisiana until we experienced it ourselves.  The answer is probably different for each individual.  I got to know friends at Reveille much better, and made some new ones.  I gained an even greater appreciation for the long hours our staff puts in.  And I enjoyed the enthusiasm and good nature of Reveille’s youth.  Though not a parent, I am an uncle, a godparent, and a family friend to many people whose children I have known from birth.  It is a joy for me to see how they interact with the world around them.

I can report this about Reveille.  We have good kids.  Not perfect, of course, but we should be very pleased to know that at Reveille they are experiencing the love of Christ, and more importantly, demonstrating it to those who may need it most.   Here’s to the Slidell Gang!