He entered Jericho and was passing through it. A man was there named Zacchaeus; he was a chief tax collector and was rich. He was trying to see who Jesus was, but on account of the crowd he could not, because he was short in stature. So he ran ahead and climbed a sycamore tree to see him, because he was going to pass that way. When Jesus came to the place, he looked up and said to him, “Zacchaeus, hurry and come down; for I must stay at your house today.” So he hurried down and was happy to welcome him. All who saw it began to grumble and said, “He has gone to be the guest of one who is a sinner.” Zacchaeus stood there and said to the Lord, “Look, half of my possessions, Lord, I will give to the poor; and if I have defrauded anyone of anything, I will pay back four times as much.” Then Jesus said to him, “Today salvation has come to this house, because he too is a son of Abraham. For the Son of Man came to seek out and to save the lost.”

In this morning’s text we encounter Zacchaeus, a figure only found in the Gospel of Luke. Luke tells us that Zacchaeus was a “chief tax collector” in the city of Jericho who has an encounter with Jesus that changes his life and vocation. In my humble opinion, it is disappointing that Zacchaeus never achieved the status of saint, especially since he is, as far as I can tell, the inventor of the tax refund.

END_OF_DOCUMENT_TOKEN_TO_BE_REPLACED

Once while Jesus was standing beside the lake of Gennesaret, and the crowd was pressing in on him to hear the word of God, he saw two boats there at the shore of the lake; the fishermen had gone out of them and were washing their nets. He got into one of the boats, the one belonging to Simon, and asked him to put out a little way from the shore. Then he sat down and taught the crowds from the boat. When he had finished speaking, he said to Simon, “Put out into the deep water and let down your nets for a catch.” Simon answered, “Master, we have worked all night long but have caught nothing. Yet if you say so, I will let down the nets.” When they had done this, they caught so many fish that their nets were beginning to break. So they signaled their partners in the other boat to come and help them. And they came and filled both boats, so that they began to sink. But when Simon Peter saw it, he fell down at Jesus’ knees, saying, “Go away from me, Lord, for I am a sinful man!” For he and all who were with him were amazed at the catch of fish that they had taken; and so also were James and John, sons of Zebedee, who were partners with Simon. Then Jesus said to Simon, “Do not be afraid; from now on you will be catching people.” When they had brought their boats to shore, they left everything and followed him.

It is said that from time-to-time, it is good for clergy in congregations like ours to share the story of our respective calls to ordained ministry, so I would like to share mine.
I was born here in Richmond at the very end of 1970, and when I arrived in this world, I was uniquely surrounded by the warm glow of bright, heavenly light. In the delivery room, the doctors and nurses remarked how beautiful I was, almost as beautiful as the sound of angelic harps being plucked above me by the heavenly host. 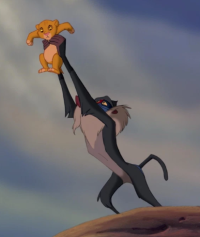 Ten months later, I was baptized in a small congregation, where the pastor ascended to the top of a high mountain and presented me to God, like Simba in The Lion King, and everyone in the congregation remarked how it was at that exact moment that they knew for certain that I was destined for service in Christ’s church, even before they heard the voice from heaven proclaim “This is my Doug, the beloved, with whom I am well-pleased.”

END_OF_DOCUMENT_TOKEN_TO_BE_REPLACED

The Israelites did what was evil in the sight of the Lord, and the Lord gave them into the hand of Midian seven years.

Now the angel of the Lord came and sat under the oak at Ophrah, which belonged to Joash the Abiezrite, as his son Gideon was beating out wheat in the wine press, to hide it from the Midianites. The angel of the Lord appeared to him and said to him, “The Lord is with you, you mighty warrior.” Gideon answered him, “But sir, if the Lord is with us, why then has all this happened to us? And where are all his wonderful deeds that our ancestors recounted to us, saying, ‘Did not the Lord bring us up from Egypt?’ But now the Lord has cast us off, and given us into the hand of Midian.” Then the Lord turned to him and said, “Go in this might of yours and deliver Israel from the hand of Midian; I hereby commission you.” He responded, “But sir, how can I deliver Israel? My clan is the weakest in Manasseh, and I am the least in my family.” The Lord said to him, “But I will be with you, and you shall strike down the Midianites, every one of them.” Then he said to him, “If now I have found favor with you, then show me a sign that it is you who speak with me. Do not depart from here until I come to you, and bring out my present, and set it before you.” And he said, “I will stay until you return.” So Gideon went into his house and prepared a kid, and unleavened cakes from an ephah of flour; the meat he put in a basket, and the broth he put in a pot, and brought them to him under the oak and presented them. The angel of God said to him, “Take the meat and the unleavened cakes, and put them on this rock, and pour out the broth.” And he did so. Then the angel of the Lord reached out the tip of the staff that was in his hand, and touched the meat and the unleavened cakes; and fire sprang up from the rock and consumed the meat and the unleavened cakes; and the angel of the Lord vanished from his sight. Then Gideon perceived that it was the angel of the Lord; and Gideon said, “Help me, Lord God! For I have seen the angel of the Lord face to face.” But the Lord said to him, “Peace be to you; do not fear, you shall not die.” Then Gideon built an altar there to the Lord, and called it, The Lord is peace. To this day it still stands at Ophrah, which belongs to the Abiezrites.

A nice thing about a life where one forges a living by preaching is that it allows you to redeem the bad things that happen to you by turning them into sermons. This is the kind of week it has been.

This past week, I was the victim of identity theft. Many of you are aware of this, thinking to yourself “I know, pastor Doug. I received the email.” Allow me, then, to give you the backstory.

In early summer, members of our church staff began receiving emails purporting to be from me requesting help, which was easy enough to deal with. However, on Friday morning, I was driving to an appointment in Charlottesville when I received a text message from a church member who had received a suspicious email from me. Then, I received another text message. Next came the emails, the phone calls, the Facebook messages, and the voicemails. By the time I arrived at my appointment, the number of people who had reached out to me was in the double-digits.
What my digital doppelgänger was doing was emailing people in our congregation while purporting to be me, asking for assistance purchasing iTunes gift cards for a child suffering with cancer. According to these emails, I would have called you and asked for your assistance in person, but my phone was malfunctioning, and only then was I forced to resort to the more impersonal medium of digital communications.
Also, my imposter was kind enough to include scripture in these emails, which depending on how you look at it, was either a nice touch or an abomination unto the Lord who the Bible attests, shall not be mocked.
I learned a couple of things from this experience. The first is that you are wonderful, generous, trusting people who are always looking for ways to make a difference in God’s world on behalf of those who are in need. The second lesson is that the experience of having people mistake who you are is very, very weird. It is serendipitous that my personal case of (very) mistaken identity occurred during a week that I had dedicated to considering the story of an Old Testament military leader, judge, and prophet named Gideon, who had his own experience of what felt like mistaken identity.
END_OF_DOCUMENT_TOKEN_TO_BE_REPLACED