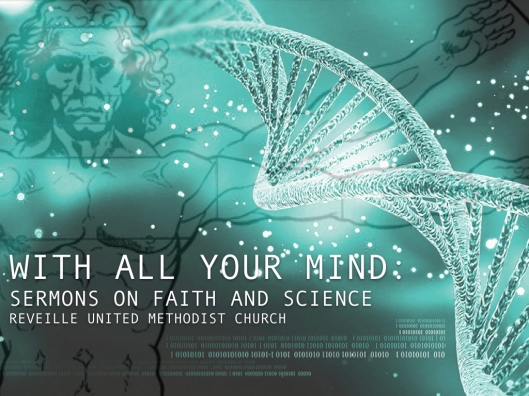 Audio will be here.

Today is week two of three of our “With All Your Mind” sermon series wherein we are exploring the relationship between science and faith. Last Sunday, we considered the science of evolution and how it relates to the Genesis story of creation. This week, we will examine what we can learn today about who God is from the story of Noah and the ark, which is also found in Genesis.

Also, let me say from the outset of this sermon that in writing it, I am in great debt to my colleague the Rev. Jason Micheli for his treatment of this text.

Forty-eight hours before the service, in Newtown, Connecticut, a severely troubled young man had entered the Sandy Hook Elementary School and killed twenty-six people, six of whom were adults and twenty of whom were students. That day would see this troubled young man also take the lives of his mother and himself. In the prayers of the people that day, I read the list of victims so our little congregation could pray for them and their families, friends, and that permanently shattered community. The list seemed to go on forever.

After the service ended, after the photos of baby Halle were taken and the sanctuary was almost empty, I noticed a woman in my congregation still sitting in her pew, weeping. She was an attorney who defended severely abused children as they moved through the official systems designed and enacted to protect them, and now she was sitting there in her pew, in a pink dress on the pulpit side, about halfway back, weeping.

“I just cannot sing that song ‘God Claims You,’ anymore” she told me, “‘God helps you, protects you, and loves you?’ How did God protect those children in that school? He didn’t, did he?”

We had spoken about her work in the past, about things parents had done to children, about bruises, cigarette burns, and much worse. And yet on that day, it was just all too much. Where is God when the world seems so broken, so wounded, and so unjust? Is God the Father like a cruel and abusive father? These are questions humans started asking as soon as we began to think about God. It is how the Bible is so filled with people like you and me asking “Why?”

To be honest, I have always had a difficult time with the United Methodist baptismal liturgy, and to be completely honest, I do not like one part of it it at all. I mean, it has its moments; the parents professing their faith on behalf of their child, the same promises that these children will make in a dozen years when they are confirmed, and I love the congregational promise where the gathered community promises to “so order their lives after the example of Christ” so that this child can be surrounded by a community that embodies the love of Christ.

However, the part of the service that makes me cringe each time I say it is during the Thanksgiving Over the Water, the part of the liturgy where the clergy recount ways in which water has been used as an important symbol in the biblical narrative. It is the part where I say “In the days of Noah, you saved those on the ark through water.” Talk about sugar coating— it is equally true to say “in the days of Noah, you drowned the whole world but one family and some animals through water.”

God helps you protects you and loves you too.

At face value, the whole story of Noah and the flood is difficult for me, and at face value, it should be difficult for any disciple of Jesus Christ. Who is this God who four chapters earlier creates the world and declares everything “good” and then, in chapter six regards God’s good creation, and then as Genesis recounts: “And the Lord was sorry that he had made humankind on the earth, and it grieved him to his heart. So the Lord said, ‘I will blot out from the earth the human beings I have created—people together with animals and creeping things and birds of the air, for I am sorry that I have made them.’”

I wish you were never born, says God to God’s precious yet disobedient children.

As my colleague Jason Micheli reminds us, “The ancient Christians had a catch-phrase they used to think about God. In Latin, it’s opus ad extra, opus ad intra; that is, who and what God is towards us in Jesus Christ (opus ad extra) God is eternally in himself (opus ad intra).(1) As we say in the Nicene Creed, as we sing in “O Come All Ye Faithful,” and as we hear in the prologue to John’s gospel in John 1, Jesus was “in the beginning” with God.

This means that God did not suddenly become kind and loving when God became flesh in Jesus of Nazareth. If God is supremely expressed in Jesus, then God has always been like Jesus, and there has never been a time when this was not true: opus ad extra, opus ad intra. (2) We do not believe as Marcion of Sinope did in the second century that there were two gods, one for the Old Testament and another for the New Testament. We believe in one God, supremely revealed in Jesus Christ. The Father and the Son are one.

And yet, in the story of Noah, it can sure be difficult to reconcile how God who we claim dies on the cross for us is also the God who drowns all but the tiniest fraction of the whole world. In this story, God sounds more like the father of those bruises and cigarette burns than God the divine Son of mercy.

The story of Noah transpires one thousand years after Adam and Eve, nine generations. Now, at my worst, I can be as cynical and crotchety as anyone, and there are days when I wonder if this world is even worth saving, yet even at my very worst, at the very bottom of the barrel, I cannot believe that there has even been a day on earth where every single living creature was evil, where every living creature deserved to be washed from the face of the earth. In the days of Noah, weren’t there babies and innocent children? What about the animals? What about a creation lovingly fashioned and decreed by its creator to be good?

But here is the thing: God’s chosen people did not create this story. They inherited and amended it. Remember any Sunday when you came to church and the world was falling apart. For some of you, it was the Sunday you arrived for worship at Monument Methodist Church at Park and Allen Streets and saw that your beloved church had burned to the ground the night before. For others, it may have been a terrible personal trauma, and expressible loss. For others, it may have been a collective national trauma as it was the Sunday after 9-11, the Sunday after the 2004 tsunami or the Sunday after shootings like the ones in Las Vegas, Virginia Tech, or Newtown, Connecticut.

The Old Testament, the Hebrew Bible, has its own worst day ever. It occurred in the year 587 B.C. when the Babylonians invaded Israel, destroyed the temple in Jerusalem and left the chosen people’s promised land in ruins before dragging the Israelites to Babylon and into captivity. While in there, the Israelites heard a story from the Babylonians called the Gilgamesh Epic, a poem from ancient Mesopotamia that is often regarded as the earliest surviving great work of literature and the world’s second oldest religious text. (3)

The Gilgamesh Epic contains a flood story that is so close to the Genesis account that few people doubt the Genesis story was derived from the Mesopotamian account (4), as it follows the Gilgamesh account “point by point and in the same order.” (5) Both stories tell of deities who decide to flood the earth due to the depravity of humankind. Both tell of the deity telling a human to build an ark. Both tell of the human loading family and animals in to the ark. Both tell of great rainfall and how when the rain stopped, the human releases a bird. In both stories, a burnt offering is made and the aroma is pleasing to the deity. The stories are essentially the same.

While a worldwide deluge such as the one we encounter in Genesis is incompatible with the modern scientific understanding geology and paleontology, there is evidence of great floods in the ancient world, although none of them occur in Israel, and it is possible that the Mesopotamian and Genesis flood accounts were born from memories of the stories of a flood around the year 2,900 B.C. in modern-day Iraq . Another of the many theories on this topic posits that ancient Greeks, Egyptians, and Romans documented fish fossils and seashells in inland and mountain areas, leading the Greeks to assume that the Earth had been covered with water on several occasions. (6)

As God’s people lived in captivity far away from home in a foreign land, their old lives in smoldering ruins, the Temple, the home of their God destroyed, in a time when they must have felt like anything but God’s beloved chosen people, and when they so easily could have believed that this God had either abandoned them or was malevolent, they reconsidered this flood story told to them by their captors.

They reconsidered this flood story and they added a rainbow to it, and in so doing, they reclaimed their God, saying that story of the flood, that story of God the abusive father, that God who regrets God’s children and who wishes to destroy God’s good creation? That is not who God is. It is not who God has ever been.

In the Gilgamesh Epic, the builder of the ark’s name means “He Who Saw Death.” In the Genesis story, the ark builder is named “Noah,” which means “rest.” (7) For those of us who believe, for those of us who follow Jesus the Messiah, the healer from Galilee, we take our rest in knowing that Christ is in the flood story, not as the sender of the rain, but as the ark, our savior, our protector. And that is how, “in the days of Noah, [God] saved those on the ark through water.” It is how God saves us.

It is why the ceilings of many church sanctuaries are designed to look like inverted boats. It is because the early Christians understood the church to be the “ship of Christ,” our protector, our hope, as the storms of this world rage around us. It is who God is. God is with us, come what may, even at our best, even at our worst and most depraved, God is still God and we are still God’s children, saved by a crucified redeemer who does for us what we do not deserve and cannot do for ourselves. It is the message of the incarnation, and it is hope for the world. God is with us, even here, even now.

5.Rendsburg, Gary. “The Biblical flood story in the light of the Gilgamesh flood account,” in Gilgamesh and the world of Assyria, eds Azize, J & Weeks, N. Peters, 2007, p. 117